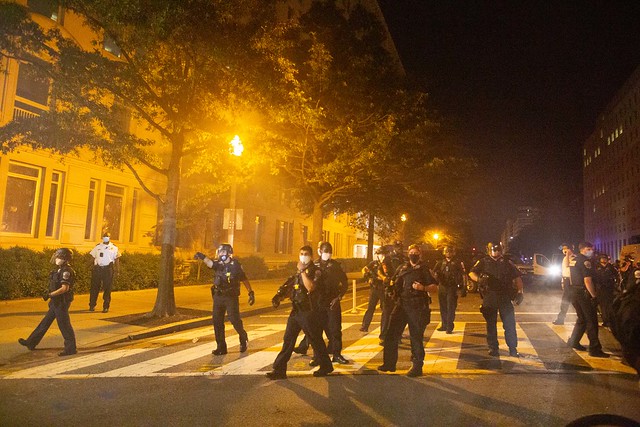 WASHINGTON – Today the ACLU of the District of Columbia filed a lawsuit on behalf of two photojournalists against the District of Columbia and eight unnamed D.C. Metropolitan Police Department officers for unleashing chemical irritants and stun grenades on racial justice protesters and photojournalists covering them at Black Lives Matter Plaza in August 2020. Just one month prior, the D.C. Council banned the use of these weapons at demonstrations in the District.

“MPD flagrantly used tactics that D.C. laws explicitly ban,” said Megan Yan, Attorney, ACLU of the District of Columbia. “It’s especially ironic that MPD responded to these demonstrations with the kind of violence that the protestors were protesting.”

On the night of August 29, 2020, photojournalists Oyoma Asinor and Bryan Dozier were covering protests against police brutality near Black Lives Matter Plaza. Sometime after 11 PM, MPD officers began deploying chemical irritants against the demonstrators and journalists without warning or provocation. Dozier was hit by irritants, causing him to tear up and have trouble breathing. He tried to escape the irritants, but another officer forced Dozier to move back into the cloud of gas. An MPD officer in full riot gear deployed chemical irritants against Asinor as he was retreating, causing his eyes to tear up and his skin to burn. Additionally, officers fired multiple stun grenades, terrifying and disorienting Asinor and Dozier.

The following evening, Asinor returned to BLM Plaza to cover another demonstration, and officers again deployed munitions such as stun grenades and chemical irritants against a crowd of protesters. The irritants caused Asinor’s skin to burn and his eyes to water. Another officer then detained him, even though he told the officer was press and had a camera he had been using to take pictures. Although Asinor did not resist, the officer shoved Asinor face-down on the ground and handcuffed him. He was detained overnight before being released without charges. Asinor’s belongings were confiscated from him and several of those items, including his phone and camera, were not returned to him until August 3, 2021. MPD had no lawful basis to keep his property for nearly a year.

The officers’ attacks on both nights caused severe psychological distress to both Asinor and Dozier, who continue to feel the effects today. They report anxiety attacks, feeling jittery around loud noises, and for Asinor, constant fear that he may be being surveilled by police after being arrested.

Last summer, police turned D.C.’s streets into a war zone,” said Asinor. “I found a voice photographing protests against police brutality but ended up fleeing it myself. The fact that MPD attacked, arrested me, and then held my camera for nearly a year for no reason sends a chilling message to everyone of what is at risk when they attend these demonstrations.

Today’s lawsuit was filed in the U.S. District Court for the District of Columbia and seeks damages for Asinor and Dozier in an amount to be determined by a jury. In addition to the constitutional claims under the Fourth Amendment and D.C. common law claims, the lawsuit charges that MPD violated D.C.’s First Amendment Assemblies Act, which (as amended by the 2020 Comprehensive Policing and Justice Reform Act) prohibits the use of chemical irritants and less-lethal projectiles at First Amendment assemblies.

Video footage of the August 29 attack can be found here and here.

Photos of the August 29 incident taken by Asinor can be found here.

More information about the case, Asinor v. District of Columbia, can be found here.