The Honorable James Robertson speaks at the ACLU-NCA 2014 Bill of Rights Awards Dinner at The National Press Club on April 23, 2014 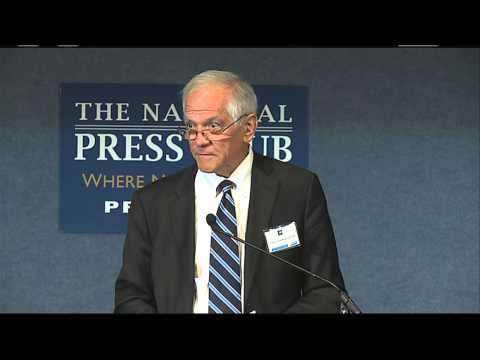 Robertson was a member of the Foreign Intelligence Surveillance Court (FISA Court) from 2002 to 2005 and was chair of the Judicial Conference Committee on Information Technology from 2003 through 2005, presiding over the introduction of electronic filing in the federal courts. In Hamdan v. Rumsfeld he granted the first writ of habeas corpus to a Guantanamo detainee, shutting down his military commission trial until Congress brought commission procedures into compliance with the Geneva Conventions - a decision reversed by the court of appeals but affirmed by the Supreme Court.

I was surprised to receive Art Spitzer’s invitation to speak tonight, but I put two and two together and figured that he probably expected me to talk about my FISA court experience, or about NSA surveillance.

But it has been more than eight years since I resigned from the FISA court, after President Bush and General Hayden turned the Foreign Intelligence Surveillance Act into a Potemkin village.  I have spent most of that time not talking about FISA, at first because I thought it was illegal to disclose classified information – silly me: just think: I could be enjoying the good life in Russia now – and then, more recently, because eight-year-old knowledge of something as fast-moving as surveillance technology is stale and of little public interest.

So it was both a surprise and, for me, a considerable honor, to be asked to speak to the ACLU about privacy – a subject on which many in this room are far more expert than I.  For those among you who are privacy wonks, what I have to say may be obvious or old hat, and for that I apologize, but it is a message that I think needs to be heard in Main Street America.  The message is this:  Don’t rely on the Constitution to protect your privacy: it won’t, not anytime soon.  The idea of privacy is more cultural than legal anyway, and to preserve it we need education more than litigation.

The so-called right of privacy is not in the Constitution, of course.  Its provenance is usually traced to a Harvard Law Review article by co-authored by Louis Brandeis in 1890 that argued for a “right to be let alone.”  Not until almost 40 years later, when Brandeis had reached the Supreme Court, did that idea surface in a constitutional case, and then only in a Brandeis dissent (Olmstead) – the question was whether wiretapping was a search requiring a warrant under the 4th amendment, and the Court said no: the government wasn’t intruding upon the defendant’s person, or his house, or his papers or effects.  It was only listening to the words he spoke out loud.

It took another 40 years for the Court to come around to the view that someone who enters a phone booth and closes the door is “entitled to assume that the words he utters into the mouthpiece will not be broadcast to the world.”  That was the Katz case (1967) that gave us Justice Harlan’s famous “reasonable expectation of privacy” test, but the Court’s opinion did not recognize a general right of privacy then and has not done so to this day.  The “right to be let alone,” the Court said, is “left largely to the law of the individual states.”

Sonia Sotomayor was 25 years old then, and presumably a telephone subscriber.  She certainly did not harbor the expectation that dialed telephone numbers were secret – she was a prosecutor.  But, 30-plus years later, her intriguing concurring opinion in the GPS tracking case, Jones (2012), asks whether the “expectation of privacy” calculus has changed.   It may be unreasonable for me to assume that I can cruise around town in my Jeep without being observed or followed – but do I not have a reasonable expectation of privacy in the whole story of my movement for a whole month?  Every inch of my Jeep’s movement, where it went, what route it followed, how long it stayed?  Now that we have GPS devices, cell location technology, closed circuit television video, automatic toll collection systems, and more, Justice Sotomayor points out, “our movements can be recorded and aggregated in a manner that enables the Government, more or less at will, to ascertain our political and religious beliefs, sexual habits, and so on.”  Does not such intense, extended surveillance violate the protection afforded by the “reasonable expectation of privacy” test?

Well, I don’t know, and neither did the Supreme Court.  And Justice Scalia, writing for the Court, was not about to let a drug conspiracy conviction stand or fall on something as indeterminate as the defendant’s subjective expectation of privacy, or the jury’s decision whether or not that expectation was reasonable.  Instead, he fell back on the pre-Katz trespassory idea of what is a search: the warrantless physical attachment of the GPS device to the undercarriage of the Jeep violated the 4th amendment guarantee that the defendant would be secure in his “effects.”  Justice Scalia even managed to fit his analysis into his Procrustean bed of originalism:  “We have no doubt,” he wrote, “that such a physical intrusion would have been considered a ‘search’ within the meaning of the Fourth Amendment when it was adopted.”

Justice Sotomayor’s concurrence suggests that it may be  time to “reconsider the premise that an individual has no reasonable expectation of privacy in information voluntarily disclosed to third parties,” but Justice Alito’s analysis demonstrates why that’s not going to happen anytime soon.   “Relatively short term monitoring of a person’s movements on public streets” would not violate anyone’s privacy, he suggests, but “longer term GPS monitoring” does.  What?  How short is short?  How long is long?  His answer is not reassuring.  “We need not identify with precision the point at which the tracking of this vehicle became a search,” he writes, but “the line was surely crossed before the 4-week mark.”

I feel pretty comfortable on the limb I am walking out on here:  The warrantless collection of telephone records has been legal since Smith v Maryland  in 1975.  The bulk collection of metadata is Smith v Maryland, squared, or perhaps raised to the tenth power.  But there is no metric for deciding when the difference between a pen register and bulk metadata collection becomes a difference in kind and not degree – or for assessing the public’s idea of whether my expectation of privacy is reasonable or not. It will be years, I think, before the Supreme Court accepts Justice Sotomayor’s suggestion to rethink the jurisprudence of privacy.  The NSA’s metadata collection may  indeed be unauthorized by Section 215 of the Patriot Act, as the recent, excellent report of the Privacy and Civil Liberty Oversight Board argues, and it seems likely to be laid low (or maybe driven back underground) by politics anyway, but it’s not unconstitutional.

That question ought to make us worry, not so much about what the government has done or might do or could do to us, but what we are doing to ourselves.

Forty-five years ago, about when Justice Harlan announced his “reasonable expectation” test, there was something of an epidemic of airplane hijacking.  The response, of the airlines and the government, was the empty-your-pockets, take-off-your-belt, put-your-bag-on-the-conveyor drill that is now hardwired as part of the flying experience.  I was a young civil rights lawyer then – well, pretty young – and I remember thinking, This is terrible.  This is an invasion of privacy.  If this continues, Americans are going to lose their instinct for privacy.

I have given myself full marks for prescience.  It has happened.

We all have Internet connections.  We accept cookies on our devices.  Most of us have Facebook or LinkedIn accounts.  All of our grandchildren do.  Every credit card transaction – every SKU that is part of every credit card transaction, becomes part of what we now call Big Data.  We know that Google reads our mail, because it sends us ads that relate to what we are writing about.

Have you heard the story – not an urban myth – of the man who stormed into a Target store to chew them out for sending coupons for baby clothes and cribs to his teenage daughter?  He returned a few weeks later to apologize.  His daughter was pregnant.  She hadn’t told her parents, but Target knew.  Its computers not only discerned her pregnancy by finding patterns in her purchases, but, because she was buying unscented lotions, it figured that she was at the beginning of her second trimester.

Big Data and its co-conspirator the Internet of Things are to our privacy as Vladimir Putin is to Ukraine.  I would like to talk about it for hours -- but I see Art with the hook.  I have a few reading suggestions for you.

Let me read just a few words from Rosen’s epilogue:

We are beginning to learn how much may be lost in a culture of transparency: the capacity for creativity and eccentricity, for the development of self and soul, for understanding, friendship, and even love.  Privacy is a form of opacity, and opacity has its values.  We need more shades and more blinds and more virtual curtains.  Someday, perhaps, we will look back with nostalgia on a society that still believed opacity was possible and was shocked to discover what happens when it is not.

I end where I began, with the observation that privacy is a cultural matter that will not be much affected by litigation.  If that sounds like a marketing message from one who retired from litigating to become a judge and then retired from judging to become a mediator and an arbitrator – well, you may think that, but I couldn’t possibly comment.