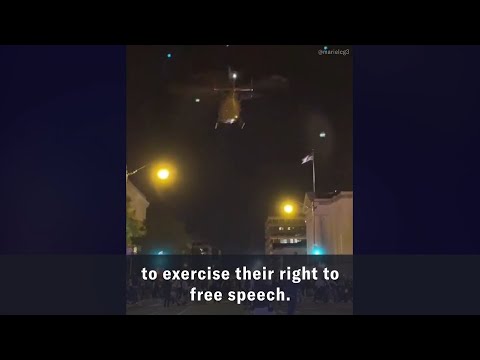 Outraged by the killings of George Floyd and Breonna Taylor, Dzhuliya Dashtamirova came to Washington D.C. on June 1, 2020 to protest police brutality and demand an end to racism. As Ms. Dashtamirova and other protestors marched around the District, government helicopters hovered overhead. At approximately 9:50 p.m., two helicopters piloted by members of the D.C. National Guard alternated flying low above Ms. Dastamirova and a group of demonstrators marching near Gallery Place and followed them as they them as they fled to Judiciary Square. The helicopters descended beneath the roofs of buildings, with one flying just three stories above the ground. Their rotors generated winds with hurricane-level force and tore signs from buildings, snapped a tree from its roots, and swirled trash and glass shards from broken windows into the air. The attack caused debris to hit Ms. Dashtamirova in the face, stinging her eyes and mouth. It also left her terrified that she would face similar force if she dared to challenge the government again.

The tactic employed on June 1 is known as a rotor wash and has been used in Afghanistan, Iraq, and conflict zones around the world. The Trump administration’s decision to deploy it against racial justice protestors on American soil constitutes unprecedented attempt to interfere with fundamental constitutional rights. On October 14, 2020, the ACLU-DC filed a formal complaint on Ms. Dashtamirova’s behalf, challenging the National Guard’s conduct and demanding accountability.

ACLU-D.C. Statement on the Revised Criminal Code Act of 2022

Letter to the D.C. Council Regarding the Anti-SLAPP Amendment Act