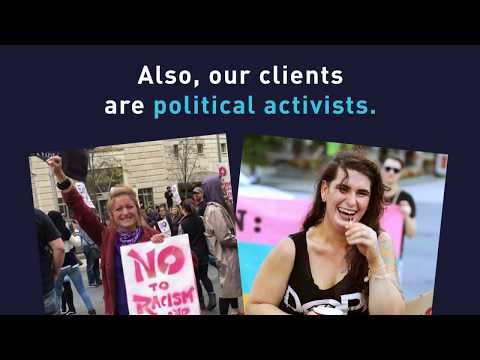 WASHINGTON – The American Civil Liberties Union of the District of Columbia went to court today to block the enforcement of search warrants targeting three Facebook accounts as part of the government’s investigation and prosecution of activists arrested on Inauguration Day 2017 in Washington D.C.

Two of the warrants would require Facebook to disclose to the government all information from the personal Facebook profiles of local DisruptJ20 activists Lacy MacAuley and Legba Carrefour from November 1, 2016 through February 9, 2017. Although the warrants claim to seek only evidence in support of the government’s prosecutions of January 20 demonstrations, they demand—among other things—all private messages, friend lists, status updates, comments, photos, video, and other private information solely intended for the users’ Facebook friends and family, even if they have nothing to do with Inauguration Day. The warrants also seek information about actions taken on Facebook, including all searches performed by the users, groups or networks joined, and all “data and information that has been deleted by the user.”

The third search warrant was issued for the “DisruptJ20” Facebook page (now called “Resist This”), administered and moderated by Emmelia Talarico. Although the page is public, the warrant would require the disclosure of non-public lists of people who planned to attend political organizing events and even the names of people who simply liked, followed, reacted to, commented on, or otherwise engaged with the content on the Facebook page. During the three-month span the search warrant covers, approximately 6,000 Facebook users liked the page.

The ACLU-DC filed a motion to intervene on behalf of the Facebook users whose accounts are targeted, and a motion to quash or modify the search warrants, arguing that the warrants are overbroad under the Fourth Amendment (which protects personal privacy) and are particularly problematic because the lawful political associations and activities of the users and thousands of third parties will be revealed. The ACLU filing asks the court either to void the warrants outright or to appoint a “special master” who is not part of the prosecutor’s office, to review the Facebook information before providing to the prosecutor only the material—if there is any—relevant to their criminal prosecutions.

“Opening up the entire contents of a personal Facebook page for review by the government is a gross invasion of privacy,” said Scott Michelman, Senior Staff Attorney, ACLU-DC.  “The primary purpose of the Fourth Amendment was to prevent this type of exploratory rummaging through a person’s private information. Moreover, when law enforcement officers can comb through records concerning political organizing in opposition to the very administration for which those officers work, the result is the chilling of First Amendment-protected political activity.”

None of the ACLU-DC’s clients in today’s filing has been charged by the U.S. Attorney with any Inauguration Day-related crimes.

The public first learned of this case when Facebook revealed it had received the warrants and challenged a gag order attached to the warrants that prevented the company from notifying its customers that their information was sought by federal law enforcement. Public interest groups including the ACLU, ACLU-DC, Electronic Frontier Foundation, and Public Citizen, as well as internet companies including Google, Apple, and Microsoft, filed friend-of-the-court briefs arguing that the gag order should be lifted so the Facebook users could challenge the constitutionality of the search warrants under the First and Fourth Amendments. On the eve of the hearing on the gag order before the D.C. Court of Appeals, the government abruptly withdrew the order. Facebook then notified MacAuley, Carrefour, and Talarico of the warrants and the threats to their privacy.

“My Facebook page contains the most private aspects of my life—and also a frightening amount of information on the people in my life. There are intimate details of my love life, family, and things the federal government just doesn’t need to see,” said MacAuley, one of the ACLU-DC clients challenging the enforcement of the warrants. “Jeff Sessions doesn’t need to see my family photos.”

"This is part of a pattern of prosecutorial overreach in the repression of Inauguration Day protestors," said Carrefour. "This warrant is more than just a violation of privacy. It is a direct attack on D.C.’s grassroots organizing community," said Talarico. "In a city rife with inequities and injustices, the deck is already stacked against us. This overreaching warrant would strike a devastating blow to organizers working every day to make this city a better place."

This is second known attempt by the government to conduct unlawful dragnet searches of the internet and social media in search of evidence against activists arrested on Inauguration Day. In a similar case of government overreach, the government had issued a warrant to website hosting provider Dreamhost for the IP addresses of the 1.3 million people who ever visited the DisruptJ20.org website. Dreamhost, supported by several amici and intervenors, challenged the scope of the warrant and went public with the government’s overbroad request. Amidst public outcry, the government asked the D.C. Superior Court to narrow the time frame of the warrant and eliminate the request for IP addresses. The court agreed and went further by demanding strict safeguards for privacy before the warrant may be executed. The government is now litigating the scope of these additional protections.

Today’s motions to intervene and to quash were filed in D.C. Superior Court. The case is formally titled In the Matter of the Search of Information Associated with Facebook Accounts disruptj20, lacymacauley, and legba.carrefour That Is Stored at Premises Controlled by Facebook, Inc.

Today's legal documents can be found at:
https://www.acludc.org/en/cases/matter-search-information-associated-facebook-accounts-disruptj20-etc