A Jewel of a Volunteer: Larry Pearl

Defending fair housing and civil rights for 60 years and counting

At the ACLU-DC, days can often blur into each other amidst the frenzy of protecting civil liberties. But we always knew it was a Wednesday when Larry Pearl, our longtime volunteer, would appear in the morning to help our Legal department screen through the hundreds of requests for legal help we receive each year.

On November 8, we will honor Larry with the Adrienne and Alan Barth Volunteer Award at our Bill of Rights Celebration to recognize his 22 years of volunteering with the ACLU-DC.

Born and raised in Philadelphia, Larry’s interest in civil rights and civil liberties began during his years at Antioch College in Ohio as he was searching for housing as a student. Landlords suddenly had no availability when he and two fellow students, one white and one Ghanaian, would show up in person to see the rental. This first sparked his interest in housing discrimination issues.

As a D.C. resident during work-study jobs as an Antioch student, he witnessed the results of landmark civil rights victories such as the fall of racially restrictive housing covenants following the 1948 Supreme Court decision in Hurd v. Hodge, a challenge to racial covenants in Bloomingdale. Five years later, Larry was at the Supreme Court on June 8, 1953, when the District of Columbia v. Thompson decision was handed down. The unanimous decision in that case, brought when a white cafeteria owner refused to serve Black patrons at his 14th St. restaurant, ended racial segregation in public places in the District. In the early 60s, Larry worked with a nonprofit group called Neighbors Incorporated to counter the effects of blockbusting in then-mostly-white Brightwood.

After a year-long fellowship at Harvard followed by graduation from Yale Law School, Larry worked for a D.C. law firm for a year before embarking on a 37-year legal career in the federal government. His first position, in 1961, was in the General Counsel’s Office at the Housing and Home Finance Agency, which became the Department of Housing and Urban Development in 1965. His work at HUD advancing nondiscrimination laws and fair housing practices across the country mirrored his work on the ground in his own neighborhood.

But retirement is when Larry’s ACLU career began. After meeting Mary Jane DeFrank, then the Executive Director of the ACLU of the National Capital Area (as the ACLU-DC was called then) at a dinner party in 1999, Larry started volunteering at the office on 20th Street, just off Dupont Circle.

If you’ve ever sought legal assistance from the ACLU-DC, you might have talked to Larry. Over the years he’s spoken with thousands of people about issues when they feel their rights have been violated. From federal government employees who've suffered discrimination by their employers, to D.C. residents who have experienced harassment, abuse, and intimidation by D.C. Police, to individuals incarcerated at the D.C. Jail seeking legal help, Larry has been a patient listener to every person's call for help for over 20 years.

When he’s not volunteering, Larry enjoys Bridge and word games, and still attends Supreme Court decision days in the spring, just as he did in 1953.

Larry’s lifelong commitment to civil rights and civil liberties inspires all of us. Thank you, Larry Pearl, for your enduring service to the civil rights of Americans across the country and the D.C. community. 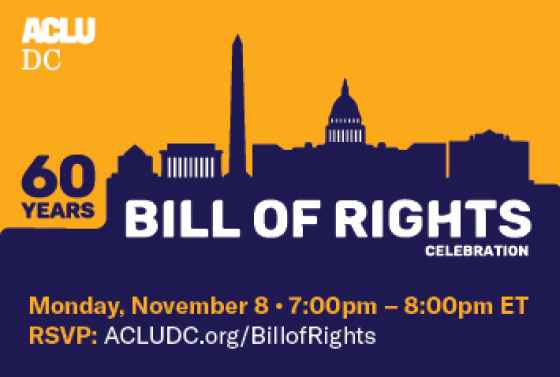