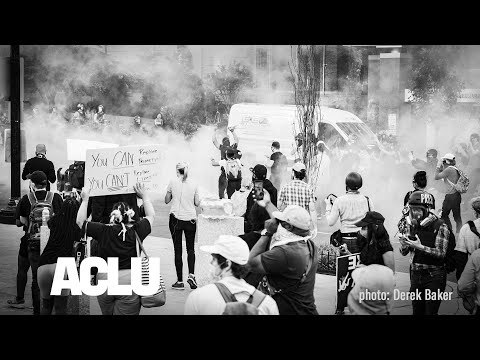 This case is about the President and Attorney General of the United States ordering the use of violence against peaceful demonstrators who were speaking out against discriminatory police brutality targeted at Black people.

Just after 8:00 pm on May 25, 2020, George Floyd, a forty-six-year-old father, son, brother, and African American man was accused of a non-violent offense and arrested by the Minneapolis police. In the process of his arrest, Mr. Floyd was handcuffed and fell to the pavement. Less than ten minutes after the police arrived, a police officer who participated in Mr. Floyd’s arrest placed his knee and the weight of his body on Mr. Floyd’s neck as Mr. Floyd lay on the ground. For eight minutes and forty-six seconds, the officer held his knee on Mr. Floyd’s neck as Mr. Floyd pleaded for relief. Other officers held his legs or stood by and watched while he died. Among Mr. Floyd’s final words were “please, please, please, I can’t breathe,” These words are reminiscent of the words spoken by Eric Garner before he was killed by a New York City police officer in 2014, which have since become a tragic rallying cry for people seeking to address racial inequities and reform the American criminal justice system.

On June 1, 2020, demonstrators gathered peacefully in Lafayette Square Park across the street from the White House in Washington, D.C., to protest the gross, systemic injustices perpetrated by law enforcement against Black people in the United States, exemplified by the murders of George Floyd and of Breonna Taylor, a Black woman who was shot eight times and killed in March 2020 by three Louisville police officers who entered her home in the middle of the night without knocking. This was a continuation of protests in Washington, D.C. and elsewhere since Mr. Floyd’s killing.

Without provocation, the President and Attorney General directed their agents in the U.S. Secret Service, U.S. Park Police, D.C. National Guard, and Federal Bureau of Prisons to fire tear gas, pepper spray capsules, rubber bullets and flash bombs into the crowd to shatter the peaceful gathering, forcing demonstrators to flee the area. Many peaceful demonstrators were injured, some severely, by this unprovoked attack.

The President and Attorney had no legitimate basis to assault the peaceable gathering. Their professed purpose–to clear the area to permit the President to walk to a photo opportunity at a nearby church –was a wholly illegal reason for abridging the constitutional rights of Plaintiffs and the others assembled in Lafayette Square. Indeed, the President has consistently demonstrated hostility towards viewpoints different than his own, and in the days and moments leading up to the attack, expressed his intent to violently attack protesters and “dominate” them.

On June 4, 2020, together with our partners, we sued President Trump, Attorney General Barr, Secretary of Defense Esper, and numerous other federal officials on behalf of Black Lives Matter D.C. and five individual protestors, including a nine-year-old boy, for violations of their constitutional rights. Our action seeks to uphold, against blatantly unlawful attack, cherished rights enshrined in the First and Fourth Amendment to the Constitution and foundational to our democracy: the rights to peaceful assembly, petition for redress of grievances, freedom of speech, freedom of the press, and freedom from unwarranted seizures by the government.

Less than a week after filing the case, we amended the complaint to add as a plaintiff an additional protestor who had been wantonly beaten by a federal officer and to expand the case into a class action. Then we discovered video footage proving that D.C. Metropolitan Police also participated in the attack by shooting tear gas at protestors as they fled. This contradicted public statements of D.C. Police Chief Peter Newsham that MPD had not been involved. In July 2020, we amended the complaint again to add Newsham and MPD officers as defendants and two of the protestors they attacked—a father and his 15-year-old daughter who had been distributing peanut butter sandwiches to protestors—as plaintiffs.

In October 2020, four different subsets of defendants filed motions to dismiss the case. Among other things, they argued that they had not violated our clients “clearly established” rights and that our clients could not sue federal officers at all for past violations of their constitutional rights. We filed our principal opposition brief in November, arguing that our clients’ First Amendment right to freedom of speech and Fourth Amendment right against unreasonable seizure were so flagrantly violated that no reasonable officer could have believed this conduct was lawful, and we urged the court not to abdicate judicial responsibility to provide a remedy for the violation of constitutional rights—a remedy that is critical to avoiding brutality with impunity and to upholding the rule of law.

On May 28, 2021, the court heard argument on all defendants’ motions to dismiss. On June 21, 2021, the court dismissed the constitutional damages claims against all of the federal officials, holding that federal officials cannot be sued for monetary compensation for violating constitutional rights whenever they do so against a crowd near the White House because of inherent presidential security implications, regardless of whether security actually justified the attack. The court also dismissed our conspiracy claims. The ruling permitted First Amendment claims to proceed against District of Columbia officers who deployed tear gas against demonstrators fleeing the federal attack (because the D.C. officers were local rather than federal). But the Court also ruled that the Fourth Amendment does not protect against excessive force used to disperse people rather than to detain them.

In April 2022, the federal government agreed to implement a series of policy reforms to settle plaintiffs’ claims for injunctive relief (i.e., claims seeking a court order to prevent future attacks against demonstrators). In exchange for the plaintiffs’ dismissal of these claims, the government will:

These changes are significant steps to protect protesters’ rights so that what happened on June 1, 2020 doesn’t happen again.

At the same time, we will be continuing to pursue our clients’ damages claims in order to hold responsible the officials who ordered and participated in the unconstitutional brutality of June 1, 2020.

In May 2022, we appealed the court decision dismissing the claims seeking compensation from the federal officials who ordered or carried out the unconstitutional attack.

U.S. District Court for the District of Columbia